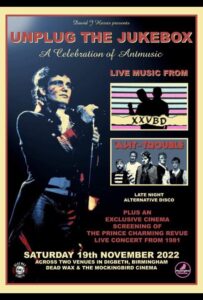 “UNPLUG THE JUKEBOX” A Celebration of Ant Music!

In 1981 Adam & The Ants were Britain's biggest colourful pop sensation much akin to the rise of T-Rex a decade before and The Beatles another decade before that. The rise and success of Adam & The Ants during 1981 could at best be described as stratospheric. They were ubiquitous, constantly featuring on magazine covers and receiving heavy radio play! They could have undoubtedly played and filled huge arenas to fulfil public demand but instead chose to perform an up close, intimate audio visual spectacular for their new found younger audience entitled “The Prince Charming Revue”.
The sold out Revue toured around the UK from December 1981 to January 1982, consisting of twenty five dates at ten different venues. The sets and backdrops were lavish, a forest, a palace, a dockside and a storm at sea, it was indeed a touring spectacle that turned any space into an Ant Theatre. There were intervals which which provided time for Adam & The Ants to don three different costume changes. During an interval the audience were treated to Ant Video, one of which was a short film documenting the Ants arrival to America.
This screening captures Adam & The Ants at the absolute peak of Ant mania!
On Christmas Day 1981 I excitedly opened my new `Prince Charming’ vinyl album and there on the inside of the gatefold sleeve my Dad had placed a pink ticket for the Birmingham Odeon. I felt like Charlie Bucket finding the fifth golden ticket to visit Wonka’s factory. This gift did not only turn out to be one of the most wonderful Christmas gifts ever, it left an unquestionable impression on my young mind and still as memorable even after forty years. Adam Ant, Marco Pirroni, Chris`Merrick’ Hughes’ Terry Lee Maill & Gary Tibbs had set the bar so high that nothing compares to the elation this concert made me feel back then, it’s a fond forever memory! Please enjoy tonight’s events.

DISCLAIMER NOTICE…. This screening serves a free bonus to those who purchase an event ticket for the live bands and disco at the Deadwax venue entitled event “UNPLUG THE JUKEBOX”
I have contacted all relevant communications to screen this concert. PPL-PRS are fully aware of the event and agreed fees will be paid. In the event of any disputes a suitable alternative will be featured. Any proceeds made from this event will be donated to a charity in memory of Jordan Mooney (Pamela Rooke)