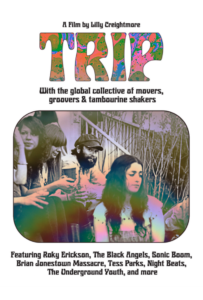 This is an intimate account by documentary photographer and filmmaker Lilly Creightmore, which captures the story of a handful of artists old and new, which influenced a resurgence of psychedelic-inspired sound, at a time when a small few of my generation were in search of an alternative from the corporatization of the music industry, to the capitalist ideal that was beginning to very visibly collapse.

Featuring live performances and intimate behind-the-scenes footage of bands and musicians from the U.S, U.K, Iceland, Europe, and South Africa. Experience the garage-psych legend Roky Erickson on tour with current-day stalwarts The Black Angels, a one-off Spacemen 3 reunion, go behind the scenes with Dead Skeletons, candid footage with Tess Parks, Anton Newcombe and The Brian Jonestown Massacre, Sonic Boom, The Night Beats in Africa, The Underground Youth and Medicine Boy in Berlin and a glimpse into the emerging Global psych scene, with the fans that attend great annual pilgrimages such as Levitation and Desert Daze.