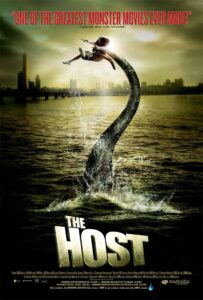 When a young girl is snatched away from her father by a horrifying giant monster that emerges from the River Han to wreak havoc on Seoul, her entire family sets out to locate the beast and bring their little girl back home to safety, in South Korean director Bong Joon-ho's big-budget creature feature.

Bong was already one of the South Korean cinema's hottest prospects before The Host, but the film's popular appeal and international breakthrough resulted in it becoming the most successful Korean film ever (at that time). What impressed critics was Bong's ability to retain the eccentric characters, offbeat humour and wild tonal shifts of his earlier work, amid the film's sweeping scope and spectacular special effects. There's also a potent political commentary throughout the film, with the monster's origins being traced to the chemical malpractices of the American military, a plotline inspired by a real life incident in 2000. This perceived anti-American message even led to rare praise from North Korea; usually only known for its virulent hostility to its neighbour's cinema.