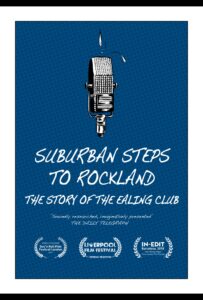 Mockingbird Doc Club: Suburban Steps to Rockland: The Story of The Ealing Club. Plus Q&A

Cast aside by most of the Central London promoters due to the loudness of their music, guitarist Alexis Korner and harmonica player Cyril Davies one day jumped into a sidecar and travelled across London to find a venue that would accept the sound of electric blues guitar.

In West London, they bumped into an Iranian student named Fery Asgari, who was the event manager of a dingy concrete-floored basement bar used by local university students.

The first Ealing Club gig took place on the 17th of March 1962. Soon young aspiring musicians from all over the country started congregating there and performing during Alexis and Cyril's sets. The list of youngsters who learnt the blues at the Ealing Club include: Jack Bruce, Ginger Baker, Paul Jones, Brian Jones, Mick Jagger, Keith Richards, Dick Taylor, Jeff Beck and Eric Burdon (just to name a few).