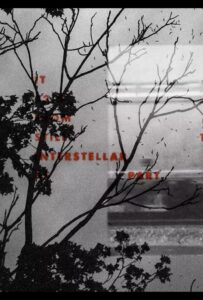 Plastiktonez is a series of experimental investigations in sound, image and text created by artist Justin Wiggan and designer James Ockelford.

The project centres on the dramatic re-imagining, both musically and visually, of nine significant pop cultural artefacts in the form of well-loved and critically acclaimed albums.
For this screening we proudly present "PRSTXS" a re-imagining of the classic "Paris Texas " which alongside Justin Wiggan and James Ockelford features the photographic work of Adrian Whipp and word by musician Richard Formby

Adrian Whipp is a photographic artist based in Austin, Texas. Adrian’s photographic work plays with the idea that our notions of photography are beginning to detach from the rules of perspective. As digital technologies continue to reshape our understanding of what a photograph can be, we are discovering immersive new ways to become transfixed by the power of an image.

Richard Formby is a British musician, engineer and producer. Formby has released his own solo electronic experimental music as well as working with Hood, The Jazz Butcher and In Embrace. He was part of Peter Kember's post-Spaceman 3 project Spectrum.He is fascinated in the ways digital perfectionism is replacing analogue anomalies and human performance error within modern music.