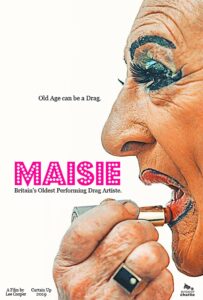 ld age is a drag in Maisie, a hilarious fly-on-the-wall documentary about Britain's oldest drag artiste David Raven aka 'Maisie Trollette', who at 88 is still shaking his
sequins after over 50 years in the business.

In director Lee Cooper's touching and insightful film, we follow David rehearsing for his 85th birthday with fellow Brighton drag royalty Miss Jason and Dave Lynne and reminiscing about
his life on the boards. To celebrate with David for this milestone, the world's oldest drag queen Darcelle XV, travels over from the USA so the two stage legends can meet for the first
time. But professional rivalries flare between our feisty pantomime dame Maisie and America’s regal pageant queen.

As his birthday grows nearer, David must deal with the challenges that performing in your 80s can bring. But ever the professional, David gives the performance of a lifetime as he
looks back on half-a-century of entertaining, surrounded by the community who love him.

Featuring Broadway classics such as 'Lady is a Tramp', 'One', and 'If I Never Sing Another Song', as well as appearances from some of the UK’s leading drag figures including Paul
O’Grady, Maisie is a hilarious, heart-warming and often heart-breaking peek into the world of a character more colourful than his gowns.