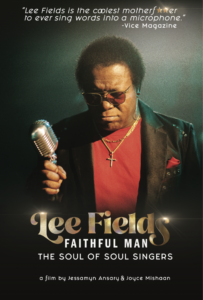 His voice has been compared to James Brown, but Lee Fields is no knock-off. He’s the real thing. Listening to the soul sounds coming through his transistor radio in the late fifties and early sixties, Lee was hooked.

Through the seventies, he made his living touring the legendary Chitlin’ Circuit alongside some of the greatest names in blues and soul history. He landed a gig with Kool and the Gang before their rise to fame. But, as the seventies came to a close, disco began its reign and Lee's soul career plummeted. For decades, he thought his music dreams were dead. But with one phone call, everything changed...

Interspersed with striking, never-before seen performances of new and classic Lee Fields songs, Lee Fields: Faithful Man takes us through Lee's memories from the moment soul music began, to his hard-won present-day success, and shows how 50 years of changing technology have conspired to create one beautiful but fleeting moment in music history. As Lee will tell you, it’s all about timing.

Lee Fields hails from a performance tradition of an all but lost musical era. Impassioned, immediate, with classic moves - his music brings the past into the present with authenticity rather than imitation. While he’s been working towards this current moment his entire career, Lee has gone through a lifetime of ups and downs. He’s experienced brushes with fame and failure, only to come back again stronger, more true to his own sound and style, more ready.

Now, his classic sound has found a new audience in the millennial generation, and they can't get enough. Lee has watched his star rise among fans that have come of age as music, and every facet of our lives, have been taken by digital storm. But what lies ahead?

In the last decade, a wave of classic artists, including Lee’s dear friends, Charles Bradley and Sharon Jones, have passed away. As more and more of the originators and celebrators of the genre leave us, Lee stands as the greatest soul singer still alive and making music today – and the responsibility of carrying this music forward into the next generation rests on his shoulders.

The magic of his voice, the deep living history embedded in his music, the raw power of his live performances – these things are happening now – and they won’t last forever. Filmmaking duo Jessamyn Ansary and Joyce Mishaan have been working with Lee on this documentary over the course of nine years, capturing this critical moment in his life, and in music history.