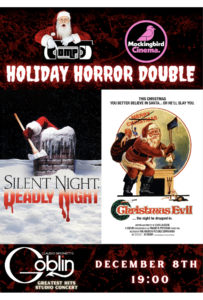 Silent Night, Deadly Night (1984) - UNCUT: Little Billy witness his parents getting killed by Santa after being warned by his senile grandpa that Santa punishes those who are naughty. Now Billy is 18, and out of the orphanage, and he has just become Santa, himself.

Christmas Evil (1980) - UNCUT: A toy factory worker, mentally scarred as a child upon learning Santa Claus is not real, suffers a nervous breakdown after being belittled at work, and embarks on a Yuletide killing spree.