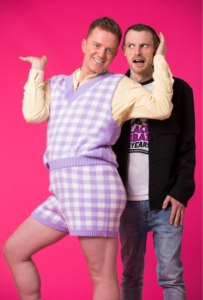 James Barr and Dan Hudson present the UK’s funniest LGBTQ+ podcast, live at the Birmingham Comedy Festival. A Gay and A NonGay started when Dan’s girlfriend friend Talia moved abroad leaving he and her gay friend James to fend for themselves. Expect audience interaction, a safe space for Dan to ask questions to the LGBTQ+ community in Things That Dan Cannot Say and a laugh-out-loud look at the differences between Gay and NonGay people. An absurdly simple but hilarious night out; one is gay, the other one isn’t

The boys will be joined by Dan Tiernan - a gay, Mancunian, dinner lady with dyspraxia but he's also the sweetest little angel that ever lived. After a sell-out Edinburgh run in 2021, he won multiple comedy awards whilst constantly resisting the urge to spontaneously join the Royal Marines. As seen on Rosie Jones's Disability Comedy Extravaganza (Dave), Best Newcomer Nominee (Chortle.co.uk), North West Breakthrough Act of the Year, Winner of the SAM Award (Edinburgh Fringe 2021). 'Born funny' (Frog and Bucket Comedy Club).