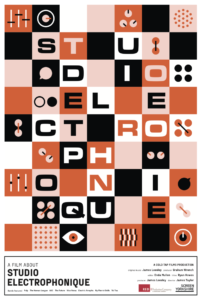 The golden age of Sheffield pop had its first stirrings in the hollow, death-marked era of Threads, Thatcher and mass redundancy. The cultural landscape was one of dole nourished musical manifestos and self-assemble synthesisers sent through the post. Pop music pilgrims arriving in Sheffield may struggle to locate its landmark sites. They are unheralded and unmarked yet still emit a feint looped analogue pulse for those devoted enough to seek them out: the attic room in Lemont Road, Totley where Cabaret Voltaire first assembled, the house on Stanhope Road, Intake where 'Babies' came from, the condemned dead end in Barber Terrace where ABC conjured glamour out of margarine sandwiches and pure imagination. The most secret and sacred of all these signless places, however, is the Ballifield council semi that housed Studio Electrophonique, the home studio owned by Ken Patten: panel beater, fly fisherman, water skier and midwife at the birth of electronic music in the north.

32 Handsworth Grange Crescent, now vacant, across from The Everest pub is where the first recordings were made for early incarnations of the bands that became The Human League, ABC, Heaven 17, Def Leppard, Clock DVA and Pulp. Not to mention the more esoteric and rare sounds of The Electric Armpits, The Naughtiest Girl Was a Monitor and Systematic Annex, whose track 'Death Trades' was recorded at Ken's in 1984 yet failed to arouse the interest of those compiling Now That's What I Call Music 4. Ken’s work never attracted the attention of the masses and, by the time 'Dare' and 'Lexicon of Love' started to shift units, the bands had all bought yachts and gold lame suits and Ken had shifted back to his own unit - knocking out dents in a garage beneath the Wicker Arches.

A Film about Studio Electrophonique, which has its London Premiere at the Barbican Centre on October 27thc, tells Ken’s story for the first time with contributions from Jarvis Cocker, Sean Bean, Martyn Ware, Adi Newton and Stephen Singleton.

Sheffield musician, James Leesley, a Ballifield native who has inherited the Studio Electrophonique name to launch his own solo project is our guide on this trip back to the Sheffield space age to celebrate the do-it-yourself ethos that made Ken the Andy Warhol of S13.